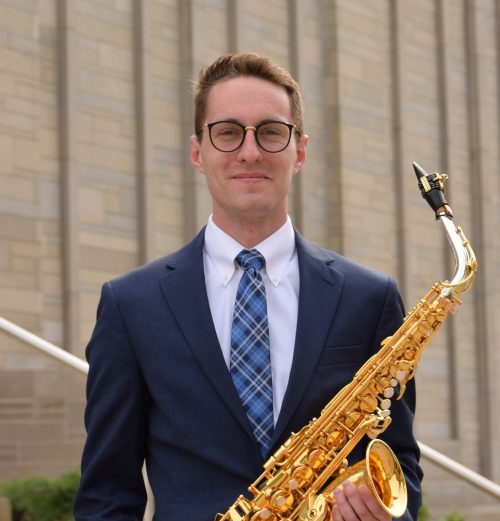 Wesley Taylor currently holds a Bachelor of Music degree with Distinction in Saxophone Performance from the Indiana University Jacobs School of Music, where he was a student of Dr. Otis Murphy.

As a soloist, Wesley won First Prize in the Music Teachers National Association (MTNA) State Solo Competition in 2019. He was also awarded First Prize in the MTNA State Chamber Competition in 2017. Wesley appeared as a featured soloist for the Lafayette Citizens Band in 2018 and gave three solo degree recitals throughout his time at Indiana University.

Wesley has played in multiple masterclasses, both as a soloist and chamber musician on all four standard saxophones. Most notably, he has participated in classes led by Claude Delangle, Philippe Geiss, Masaki Tadenuma, and both the Kenari and Zzyzx Saxophone Quartets.

He is an active patron of new music, participating in more than 15 premieres over the course of his time at Indiana University. Wesley has also presented new music at the Midwest Composers Symposium, the Navy Band International Saxophone Symposium, and on Dr. Don Freund’s Faculty recital. In 2018, he performed alongside the Indiana University Philharmonic Orchestra in the collegiate premier of The (R)evolution of Steve Jobs Opera by Mason Bates.

Wesley possesses a wide variety of performance experience, having played with the Indiana University Wind Ensemble as well as multiple Orchestras at Indiana, including their Conductors and Philharmonic Orchestras. Additionally, he has been an active member in three quartets, most recently the Bloom Quartet in which he played Soprano Saxophone.

Wesley is pursuing a Master of Music degree in Saxophone Performance at the Eastman School of Music where he is a Graduate Assistant and is a mentor for the New Horizons Music program at the Eastman Community Music School.