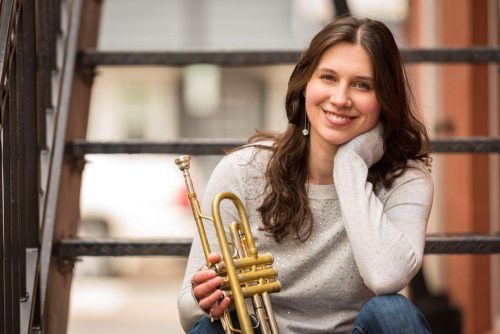 Born and raised in Spencerport, Tierney McLean has been inseparable from her trumpet since she began playing fifteen years ago. Eastman Community Music School is near and dear to her heart, as she is a proud alumna of both Herb Smith’s trumpet studio, and Wes Nance’s trumpet ensemble. Awarded the Spencerport Music Association Scholarship upon her high school graduation in 2011, she moved to Ohio to pursue a Bachelor’s Degree in Trumpet Performance at the University of Cincinnati College-Conservatory of Music under the instruction of Alan Siebert and Philip Collins. There she was awarded numerous merit scholarships, as well as being named a winner of the International Trumpet Guild Conference Scholarship Competition in 2013. That summer she won an internship at the Wagon Wheel Theater in Warsaw, Indiana. She returned for a total of three consecutive summer seasons, and over one hundred performances of a dozen shows.

Tierney is currently on faculty at the Roberts Community Music School, and at the Eastman Community Music School, teaching private trumpet lessons for both schools. The Eastman New Horizons program holds a special place in her heart, where she runs band sectionals with the trumpet players, and directs the Antique Brass Ensemble. Locally, she has performed with the Rochester Philharmonic Orchestra, Brighton Symphony Orchestra, the Greater Rochester Women’s Philharmonic, the South Seneca Music Festival Orchestra, and the Center Stage Pops Orchestra. She was recently voted in as a board member of the Greece Performing Arts Society, which keeps her active in the larger musical community, when she is not playing and teaching.

She will be pursuing her Master of Music degree at Eastman School of Music in the fall, while serving as a Teaching Assistant for the Music Education Department’s trumpet method classes.