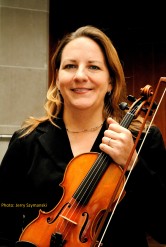 Lara Sipols (violin) has been a violinist of both the Rochester Philharmonic and Chautauqua Symphony Orchestras since 2002. An active chamber musician in the Rochester area, she has performed as a guest of the Finger Lake Chamber Ensemble, Quartsemble/Gibbs and Main Ensemble, the Elgar String Quartet, the Rochester Philharmonic Educational String Ensemble and as a part of the musical community of St. Paul’s Episcopal and Third Presbyterian Churches. Ms. Sipols has participated in numerous recordings, including the jazz, rock, commercial and, of course, classical genres. She is a member of the Eastman Community Music School string faculty and is an adjunct professor and Rochester Philharmonic Orchestra liaison at the SUNY College at Brockport, where she coordinates an annual lecture and outreach performance series. Ms Sipols has always maintained a private teaching studio and was also a member of the San Antonio Symphony’s Music Advancement Program (MAP) for “at-risk” pre-teens. She is a former chairperson of the Rochester Philharmonic Orchestra’s Music Educator Awards Committee. In service to the orchestra, she was also a member of the RPO’s board of directors’ central strategic planning committee (2010), which reviewed and discussed the findings of several sub-committees, including the Education Committee.