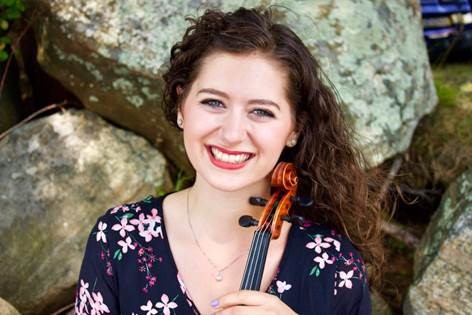 Violinist Holly Spangenberg recognizes the need for multi-faceted musicians and is passionate about sharing diverse music both in the concert hall and in the community. A graduate student at the Eastman School of Music, she has performed with Eastman’s Philharmonia, Musica Nova, OSSIA, the Beal Institute for Film Music and Contemporary Media, Collegium Musicum, and other ensembles. In addition to performing in the concert hall, Holly believes in the importance of community outreach and has played in countless nursing homes, churches, museums, local events, and schools since she was a young student, giving both benefit and educational performances.

Most recently, Holly performed as a fellow with the National Repertory Orchestra during the 2019 summer season. She also served on the music staff at CAMP-of-the-WOODS in 2017 and 2018, where she performed numerous concerts each week with the incorporated musical styles of classical, sacred, pop, and musical theater in formal and family educational settings. In 2016, she traveled with her chamber group to France where they presented a concert series in Bordeaux and were featured guest performers at the Rencontres Musicales Internationales des Graves. In 2013 Holly made her solo debut with the Milwaukee Symphony Orchestra at the age of 17.

Holly earned her Bachelor’s Degree with honors from the Eastman School of Music in 2018. Currently, she is pursuing her Master’s Degree in Violin Performance at Eastman where she studies with Juliana Athayde.