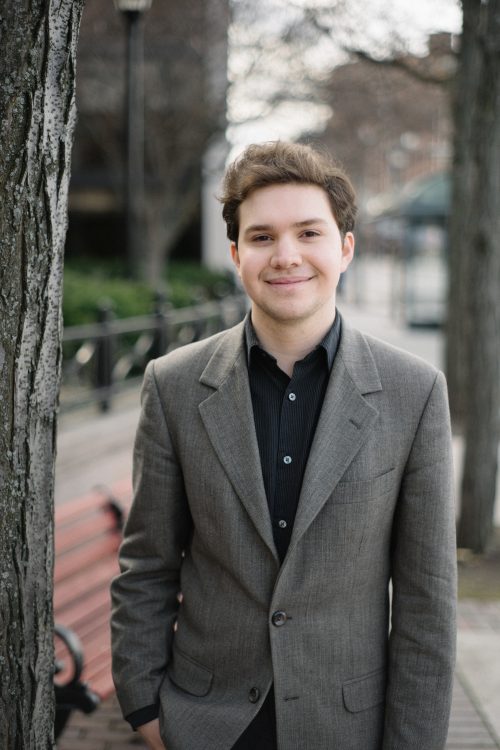 William Evan Ritter is a pianist, composer, and pedagogue from Dallas, Texas who is currently based in Rochester, New York. A recent graduate of the Eastman School of Music, Evan received his Bachelor of Music in Piano Performance in addition to the Peter Salaff Prize (‘18) and John Celentano Award (‘17). He is currently a double Master’s Degree student at Eastman studying Piano Performance and Literature, and Piano Accompanying and Chamber Music. At Eastman, his primary teachers are Dr. Douglas Humpherys and Dr. Jean Barr. Prior teachers include Dr. Bret Serrin at the Suzuki Music Institute of Dallas; Anton Nel at the Aspen Music Festival and School; and Marc Durand at Orford Musique.

A consummate chamber musician as well as soloist, Evan is a founding member of the Windsor Piano trio, an award-winning group that has performed in the United States and Canada. In 2017, the group claimed first prize at the National MTNA Competition and were finalists at the Coltman Chamber Music Competition in 2016. The Windsor Trio was closely mentored by Professors Elinor Freer and David Ying at the Eastman School of Music. There, they also performed in masterclasses for Trio Cleonice and the Kalichstein Laredo-Robinson Trio.

Outside of performance, Evan has taught students of all ages and levels. Since 2015, he has been on the faculty of the Southeast Asia Music Festival. There, he works with a studio of students from the Philippines teaching private lessons, masterclasses, and group classes. As part of his position, Evan has performed in venues in the Philippines including Valencia City, Manila, and Bukidnon. Inspired by his own Filipino heritage, Evan is committed to providing
high-quality music training to other young Filipino students. Currently, Evan is a Piano Faculty Intern at the Eastman Community Music School.

As an advocate of new music, Evan has given US premieres of several works including Alexander Schubert’s Point Ones and Joseph Clark’s Alto Clarinet Sonata. Additionally, Evan has acted as a member of SoundExchange, and the Andrew Alden Ensemble, a group which performs music for silent films that include improvisation and modern compositions by Andrew Alden. In 2018, the Windsor Trio commissioned and premiered a piece by Alden written for piano trio, “House of Leaves”.

As a composer, Evan writes in a style that combines electronic and acoustical sound. His Fantasy for Piano and Fixed Media was premiered in 2017, and he is currently working on a commissioned piece for Alto Clarinet and Electronics, as well as a piece for solo cello and electronics. In addition to composing, Evan creates avant-garde video art for installations and live performances.

Evan has held the position of Choral Scholar at Christ Church Rochester since 2014 and was a member of the Christ Church Schola Cantorum as a bass vocalist. Evan is an acting Jack Kent Cooke Foundation Graduate Scholar.