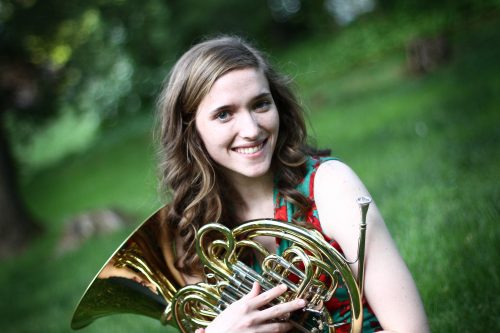 Elizabeth Simmons, a native of Johnson City, Tennessee, is a graduate student at the Eastman School of Music, where she studies horn with Professor Peter Kurau and is a Graduate Teaching Assistant.

She recently graduated from Samford University in Birmingham, Alabama, where she studied with Kevin Kozak to earn a B.M. in Horn Performance.  During her undergraduate career, Ms. Simmons was a member of each of the university’s major ensembles, playing principal horn consistently from 2014-2017, and was actively involved in various chamber ensembles.  Before Samford she attended Science Hill High School, where she participated in the band program.  During this time she also performed with the Symphony of the Mountains Youth Orchestra, where she played principal horn from 2011-2013 and was the winner of the 2013 Joyce Brown Senior Concerto Competition. Her primary teachers were Stephanie Blaha and James Blalock.

In 2016, Elizabeth participated in the soundSCAPE festival for new music in Maccagno, Italy, and in 2017 she joined the staff of Kendall Betts Horn Camp, after having attended the camp as a student since 2010.

Ms. Simmons is excited to join the faculty of the Eastman Community Music School as an intern.