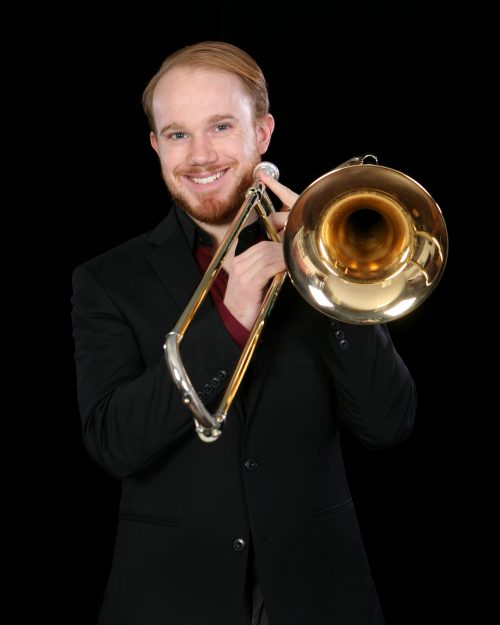 Dillon C. Downey focuses his diverse interests to expand the use of fresh and healthy concepts in music education and performance.  Downey’s primary focus is as an educator, researcher, and pedagogue.  In addition, he is a performer and continual student of his craft.

An accomplished educator, Dillon has begun to display his research in musician’s health, developmental theories, and musicality in recent guest presentations at the Eastman School of Music, the Oklahoma Trombone Workshop, and the International Trombone Festival.  Currently, Downey teaches aural musicianship and trombone methods at Eastman, and is a faculty member at the Eastman Community Music School.  Prior to those positions, Mr. Downey served as the Music Specialist at Tomás Rivera Elementary School in Denton, TX, and was the director of the children’s and youth music programs at Trinity Presbyterian Church in Flower Mound, TX.  Downey has directed his own early childhood music program and assisted with a similar program at the University of North Texas.  Dillon also taught music and English at the Billrothstraße Gymnasium in Vienna, Austria.

As a performer, Dillon has played in such prominent venues as Carnegie Hall, the Wiener Konzerthaus, and the Dallas Meyerson Center in addition to solo performances in Germany, the Czech Republic, Austria, and the United States. Mr. Downey is a versatile artist, and performs on alto, tenor, and bass trombones and alto, tenor, and bass sackbuts. He has performed professionally with the Richardson (TX) Symphony Orchestra, the Texas Camarata, and other organizations. Dillon performs regularly in recital and in chamber ensembles. He is a founding member of the Broken Bones Quartet. In 2013, he performed in and lead a trombone quartet at the International Trombone Festival. That summer, he recorded the inaugural set of videos for the International Trombone Association’s video initiative with Dr. Irvin L. Wagner.

Downey is pursuing Master of Music degrees in Trombone Performance and Repertoire and Music Education at the Eastman School of Music under the tutelage of Professor Larry Zalkind. He is a student in Eastman’s Advanced Certificate in the Pedagogy of Music Theory program. Dillon graduated summa cum laude and as a Distinguished Honors Scholar from the University of North Texas with undergraduate degrees in Trombone Performance and Music Education. At UNT, he was inducted into the Pi Kappa Lambda National Music Honor Society and the Honor Society of Phi Kappa Phi. He received the Golden Eagle Award, the most prestigious award for a student leader at UNT. Dillon expanded upon his collegiate experience, studying abroad at the International Education of Students Center in Vienna, Austria and privately with members of the Wiener Philharmoniker. Mr. Downey is Oklahoma’s representative to the Trombone Artists Performing for Amateurs and Students program. He has earned his Kodály certification from the Midwestern State University Kodály Institute. Dillon is a passionate citizen of the world and enjoys traveling, boating, eating ice cream, and spending time with those closest to him.