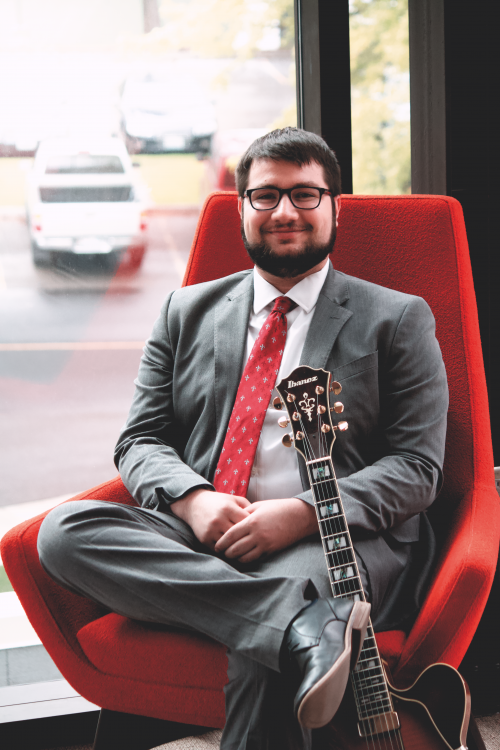 Denin Koch is an American jazz guitarist and composer whose unique sound synthesizes a large cross-section of music from around the world, including jazz, classical, indie rock, calypso, electronic, Thai and African elements. His musical aim is first and foremost to speak to and move audiences, regardless of the form the music takes. He has performed with Arturo Sandoval, Pat Metheny, Wycliffe Gordon, Branford Marsalis, Dee Daniels, Ellis Marsalis and Rosario Giuliani.

Koch studied jazz guitar at Whitworth University in Spokane, Wash. with professors Daniel Keberle and Brent Edstrom. He also studied classical guitar with Paul Grove, completed a minor in English and worked as a teaching assistant in ear training, music history and jazz history. He has held positions in the Spokane Jazz Orchestra and recorded with the Bob Curnow Big Band, leads the Denin Koch Trio and performed as a guest artist with Hot Club of Spokane, Eddie Manzanares and the Spokane Symphony Orchestra. In 2018, he was awarded and accepted a graduate assistantship in the jazz department of the Eastman School of Music in Rochester, N.Y., where he now lives, works and studies with Bob Sneider and Dave Rivello. He is also on the faculty of the Eastman Community Music School and an Arts Leadership Certificate candidate. While at Eastman, Koch has published “Kurt Rosenwinkel’s Star of Jupiter: Transcriptions and Analysis” through Mel Bay Publications, performed in the Eastman New Jazz Ensemble (including playing solo roles on the premieres of new works for big band) and composed a number of new works. His piece, “B Reactor,” was premiered by the Eastman New Jazz Ensemble in February 2019, and he is currently composing the music for his debut record, to be released in 2020.

Upon graduating from Whitworth, Koch received the 2018 Whitworth Music Department Leadership and Service Award (as voted upon by the music faculty) for musical excellence and outstanding service to the music department.  Koch was also awarded a full-tuition scholarship by the university in the spring of 2014. At the 2017 Elmhurst Jazz Festival, the judges recognized him as one of the festival’s outstanding musicians. Later that year, he won the Musicfest Northwest Young Artist competition in the guitar division and performed the second movement of the Villa-Lobos Guitar Concerto with the Spokane Symphony. He also was chosen as a winner of the 2017-2018 Whitworth Concerto Competition for his composition “season’s passing,” a concerto for jazz guitar, strings and percussion. The work was premiered by the Whitworth String Orchestra in May 2018 with Koch performing the solo part. In spring 2017, Koch’s research project “Learning to ‘Read’ a Jazz Solo: Dissecting the Language of Pat Metheny” was chosen for presentation at the 2017 Spokane Intercollegiate Research Conference.