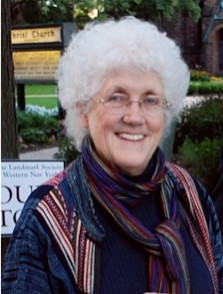 Mitzie Collins (Instructor, hammered dulcimer classes: Co-director Striking Strings Hammered Dulcimer Ensemble) A native of Dallas, Texas, Mitzie Collins is known as a recording artist, a performer of Celtic and traditional American folk music, and a historian of the American hammered dulcimer.  Collins received the degree Bachelor of Music with a major in piano from Eastman in 1963, and the degree Master of Arts with a major in Music Education, and a Diploma in Ethnomusicology from Eastman in 2005.  For her many musical contributions to the community, Collins received the 2007 Artist Award of the Arts and Cultural Council of Greater Rochester, and was named the 2014 Musician of the Year by the Rochester Alumnae of the Mu Phi Epsilon Music Fraternity.

Mitzie Collins initiated classes in hammered dulcimer at ECMS in the Fall of 2005, and created the “Striking Strings, The Eastman Community Music School Hammered Dulcimer Ensemble”, in January of 2008.  Composed of students from the hammered dulcimer classes that Collins has taught through the ECMS and professional and amateur players from the community, the ensemble has quickly become a popular performing group in the Rochester area.

Linda SniedzeTaggart became Co-Director of Striking Strings, as well as co-instructor of the classes in 2015. Under the direction of Taggart and Collins Striking Strings explores tunes from around the world as well as from the dulcimer and fiddle tradition of Western New York State.  Among their many performances are appearances at Kilbourn Hall, The Heart of the Alleghenies Folk Festival in Bradford, Pennsylvania, 2009; Eastman at Albion Courthouse Square Series, 2011, 2012 and 2014; The Fiddlers’ Fair at the Genesee Country Village and Museum; and the 2010 World Canals’ Conference.  The group currently has nineteen members.

Mitzie Collins taught Western Music History at ECMS from Fall 2010 to spring, 2017; she frequently enlivened her history class with visiting artists, and led class field trips to the Craighead – Saunders Organ at Christ Episcopal Church.  Collins taught world music and produced a summer World Music Concert for the summer ECMS Music Horizons program for 20 years.  She was recently named to the board of Publick Musick , a Rochester-based, early-music ensemble.

Mitzie Collins is a board member of the Hungarian based organization Cimbalom World Association and has traveled to CWA congresses in Beijing [2005], Oberammergau, Germany; [2007]; Querétero, Mexico,  [2009];  Taipei, Taiwan [2013], and Malvern, England [2015]

With seven members of the Striking Strings Hammered Dulcimer Ensemble, she traveled to Budapest, Hungary, and performed for the 11th Congress of the World Cimbalom Association in October of 2011.  Collins was a featured performer at the Nonesuch Dulcimer Club of England’s Fall Weekend in 2007 as well as at the Original Dulcimer Players Club Fun Fest in Evart, Michigan, in 2012 and 2013.  She gave lectures, performances and master classes on the American Hammered Dulcimer at the Academy of Arts in Banská Bystrica, Slovakia, in 2012.

Collins was one of the founders in 1971 of the Golden Link Folk Singing Society of Rochester and remains active in the organization.  She was named an honorary member of Delta Kappa Gamma Society International, a professional honorary society of woman educators and is an alumni member of Mu Phi Epsilon International Musical Fraternity and of the Kappa Kappa Gamma social sorority.  She has performed traditional music from Western New York State as a member of the Flint Hill Folk at the Genesee Country Village and Museum since 1978.  As a member of “The Sampler Trio” she performed regional Christmas concerts for twenty-six years with Glennda Dove, flute and Roxanne Ziegler, harp.  Mitzie Collins has twice been voted “Best Rochester Folk Musician” by City Newspaper.

From 1975 to 1985 Mitzie Collins hosted and produced the children’s radio program, “Sounds Like Fun” for WXXI-FM. She was an adjunct member of the music faculty of Nazareth College from 200 7 to 2008.

Collins is active in the Rochester area as a substitute organist and traveled to the Netherlands in 2011 on a special “Organ and Art” cultural tour.  She regularly contributes reviews to the quarterly publication of the Association for Recorded Sound Collections, the ARSC Journal, and also writes for the Homework Column of the Landmark Society, published in City Newspaper. She continues to participate in musical residencies in Rochester and suburban schools, and gives talks on the local history of the hammered dulcimer to regional historical societies.

For twenty years Sampler Records Ltd produced “A Concert of Traditional Irish Music” which was one of the largest folk music concerts held in Rochester. Sampler Records Ltd. also produced an annual Christmas concert at the Hochstein School of Music and Dance for eighteen years.

Visit www.samplerfolkmusic.com for a complete listing of recordings and concerts by Mitzie Collins and the Striking Strings.