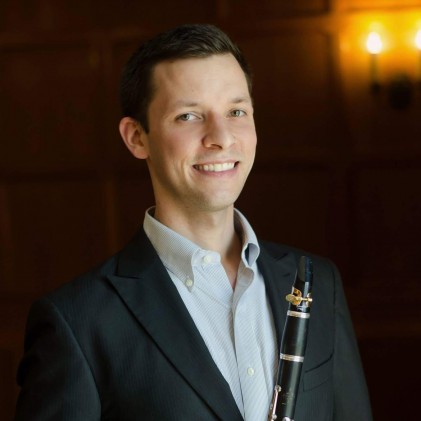 Carl Galland received clarinet performance degrees from the University of Texas at Austin (B.M.) and from Eastman School of Music (M.M.). He is a current doctoral candidate and Teaching Assistant Graduate Award recipient at Eastman School of Music. His principle clarinet teachers have been Richard MacDowell, Nathan Williams, Kenneth Grant and Jon Manasse.

Carl has attended orchestral, chamber and solo music festivals in Maryland, Washington State, Indiana, Wisconsin, Tennessee, France, Estonia, Latvia, and Finland. He was a semi-finalist in the ClarinetFest Young Artist Competition in Assisi, Italy (2013) and was a finalist in the Coeur d’Alene Concerto Competition (2013 and 2014). And he was the first place winner with an award for best overall performance in the college solo division of the 198th Army Reserve Solo Competition, judged by members of Perishing’s Own Army Band from Washington D.C (2015). He has recorded for the Naxos label with the University of Texas at Austin Wind Ensemble and the Eastman Wind Ensemble.

Carl has been teaching clarinet at the Eastman Community Music School for 4 years and is a freelance clarinet recitalist and chamber musician in the Rochester area. He is also the organist and music director at St. Mary and St. Mark R.C. parishes. In addition to teaching clarinet, he accompanies his students on piano and holds an annual ECMS Clarinet Studio Recital in the late Spring.