Andrew Watkins Alcocer is a first year doctoral student at the Eastman School of Music, studying jazz trombone performance. He recently completed his master’s degree at Eastman, and previously completed his bachelor’s degree at California State University, Fresno, where he studied both trombone and upright bass. As a performer, Alcocer was named “Outstanding College Trombonist” by the Reno Jazz Festival in both 2017 and 2018. As a composer, Alcocer earned the Global Music Award’s silver medal for his piece “Soliloquy” and was recently selected to take part in a masterclass for the International Society of Jazz Arrangers and Composers. Alcocer currently directs his own large ensemble in California, and is frequently in demand for commissions and arrangements for big band, small group, and commercial writing. 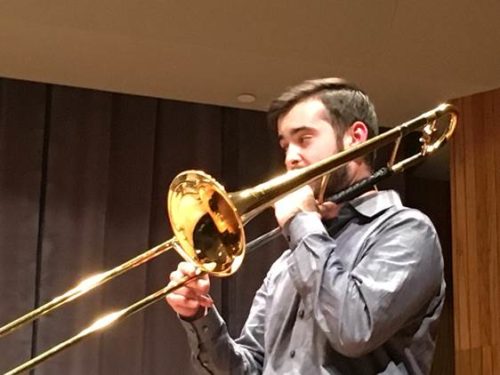