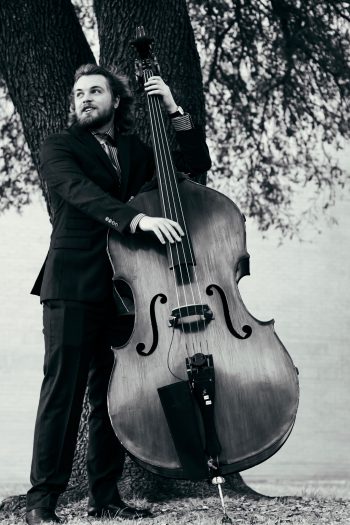 Andrew Dill is a jazz bassist, originally from Setauket, New York. Andrew started playing the Double Bass at the age of 8, focusing heavily on classical repertoire. He shifted his focus from classical music to jazz at the age of 16, and immediately began performing in New York. Andrew recently received his Bachelor of Music in Jazz Studies from University of North Texas.  At UNT he was a four year recipient of the Jazz Leadership Scholarship (in honor of Neil Slater and Jim Riggs).  While at UNT he performed in various Lab Bands and small group ensembles.  Andy also resurrected UNT’s Bruce Hall Big Band and was its Director and Coordinator. He is now attending Eastman where he is pursuing a Master of Music in Jazz Studies and Contemporary Media.

Andy has studied with Lynn Seaton, Jack Helsley, James Cammack, Barry Smith, and Daniel Nix among others. He has been based in Dallas for the past four years and performs regularly in the Dallas/Fort Worth area. He has played with Paul Stephens and Steve Reid in the Rebel Alliance Jazz Ensemble.

Some of Andrew’s interests outside of music include weightlifting and playing billiards.