Eastman and Jazz 90.1 Return to the Essence 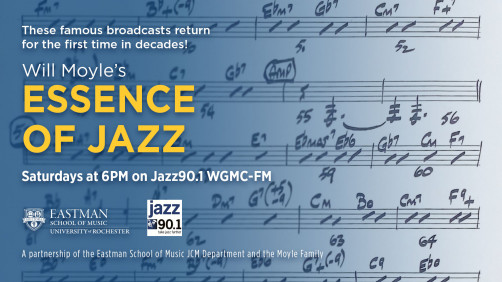 Thanks to a partnership of the Eastman School of Music, radio station WGMC Jazz90.1 FM, and the Moyle Family, listeners can once again enjoy two Rochester broadcasting legends: announcer and jazz authority Will Moyle, and his interview show Essence of Jazz, which ran during the 1970s and featured a Who’s Who of jazz artists.

Starting April 26, Jazz 90.1 FM began playing digitized versions of 75 of Moyle’s Essence of Jazz shows (which number about 450 over his years as a broadcaster, beginning in 1953). The shows will also stream online at Jazz901.org

Moyle, who died in 1996, was known in Rochester since 1953 as a reporter for local radio and television stations and was also a concert promoter during his first years in Rochester in the 1950s, bringing to town such old-school jazz greats as Dave Brubeck and Woody Herman. He was best known within the jazz world for Essence of Jazz.

These series were broadcast on several Rochester radio stations over three decades and included interviews with some of the most prominent jazz musicians of the last half-century, when their tours included a gig in Rochester.

“Will Moyle was well-known in the world of jazz, and his famous radio broadcasts captured some of the biggest jazz names of the day, “ says Jazz90.1 Station Manager Rob Linton. “When Mr. Moyle passed away, the family entrusted The Eastman School of Music with these recordings, and through his partnership, we can again bring them to fans old and new.”

According to Eastman Professor Jeff Campbell, not long after Will Moyle’s death, his son Bill donated tapes of 50 Essence of Jazz shows dating back to the 1950s which we were digitized and went to the Sibley Music Library. After that initial gift, Bill Moyle moved from Rochester to New Jersey and it wasn’t until five or six years ago that Bill contacted Harold Danko to offer the rest.

Campbell recalls driving to Moyle’s house with Danko and returning with many boxes of tapes and papers, and more than 9,000 jazz records, all going to the Sibley Library. (The LPs are being organized to create a listening room for jazz students.) 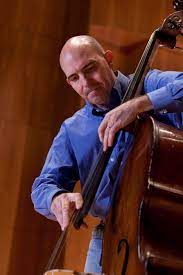 According to Campbell, Will Moyle conducted all the interviews in person and edited them in his home studio. He adds that the original reels contain much more conversation and information than the airplay versions.  Moyle painstakingly spliced and edited the conversations. and then just as painstakingly dubbed in music – and this was the LP era, so music from the records also had to be transferred to reel-to-reel tape. (The collection also includes five reel-to-reel machines.)

Sibley Library will still keep these original tapes, as well as each of the edited and digitized versions. Campbell adds that Moyle sent a tape of each interview to its subject, so many more examples probably still exist, all over the country.

Besides the tapes, LPs, and shows, Campbell notes that the Moyle Collection also includes seven boxes of papers: “His documentation of everything is stellar,” he says. “There are even eight or ten three-ring binders in which Will listed every LP he owned and all the performers on it.”

Campbell may not have been in Rochester to listen to the original Essence of Jazz, but after listening to many of the shows, has he formed a positive opinion of Will Moyle? “Oh, yes. He was a charming host who knew the music well and did his homework” – while documenting an important chapter in American musical history.