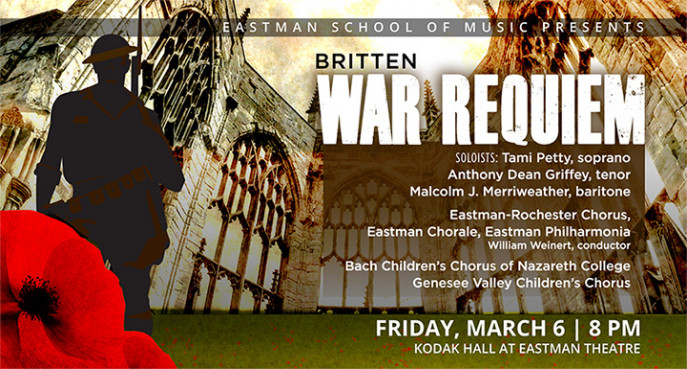 On Friday, March 6 at 8 p.m. in Kodak Hall, several ensembles from around the Rochester community will join together for a powerful performance of Benjamin Britten’s War Requiem. The masterpiece will be performed by the Eastman-Rochester Chorus, Eastman Chorale, Eastman Philharmonia, and the Bach Children’s Chorus of Nazareth College and Genesee Valley Children’s Choir. The concert will be conducted by William Weinert and will feature three Eastman alumni as soloists: Tami Petty ’96E (MM), ’06E (DMA), soprano; current Professor of Voice Anthony Dean Griffey ’01E (MM), tenor; and Malcolm J. Merriweather ’10E (MM), baritone. The performance is free to the public.

This massive concert is a capstone performance during the American Choral Directors Association (ACDA) Eastern Region Conference which Rochester will host from March 4 to March 7. In preparation for this event, I had the opportunity to talk with conductor Dr. William Weinert about what it means to perform a work as great as this:

Q: Britten’s famous War Requiem has served as a symbol of peace since its composition after World War II. [It was first performed in 1962 at Coventry Cathedral.] How do you think its meaning holds true in today’s world? Why is it still important to perform the piece?
A: Although the piece reflects specifically on the two 20th-century World Wars, horrible wars are raging now over the world. Atrocities against civilians continue. As we began rehearsals in January it looked very much like our country would be at war with Iran; last year it was North Korea. Not to mention the factions in our country that behave as if they are at war with each other, and frequently show this through violence. War Requiem is much more about reconciliation than about war itself. Reconciliation at both a political level, and at a very personal level, between individuals, especially at the close of the work.

Q: How do the interwoven English texts by Wilfred Owen add to the message given by the traditional Latin “Mass for the Dead”?
A: Owen’s poetry comes out of World War I—he was killed a week before the end of the war. The poetry is deeply ironic, and lays bare the deceptions that led to so many deaths. War was a glorious adventure—until you were in a trench for months, if you lived that long. The deception of “glory” was offered wholesale by the institutions of religion: churches. England and Germany especially were full of preachers urging boys to sign up to defend their country and their “civilization,” as if war and civilization could have anything to do with each other.

Britten glues the church liturgy, which asks for “rest” and “peace” for the dead to Owen’s words, which make clear the responsibility and guilt of the church itself for supporting so much killing, in the “Great War” in particular. But I think we would have to look hard to find a church or a religion in our own time that places world peace or reconciliation very high on its list of priorities. The vivid conflict between a liturgy of peace in a war-mongering church is central to the War Requiem.

Q: With three soloists, a chorus, a boys’ choir, and two orchestras, this piece is a feat of musical engineering. What have been the most challenging and rewarding aspects of putting together a performance of such a grand scale?
A: The idea that over 300 people of so many backgrounds, from all over the world, are coming together to present a message of peace is overwhelming to me. The ensemble literally includes people from 8 to 80, and from at least four continents. It includes highly trained professionals, and people of various ages who have no formal musical training. Yet Britten is the supreme master at blending sophisticated yet singable music for children with music that stretches volunteer choirs, but not to the breaking point, with demanding, expressive music for virtuoso professional singers and players. Everyone is stretched and reaches a new level of concentration, yet to the audience the music sounds effortless. Truly no other composer even attempts to bring together such a variety of forces in so many works.

Q: Finally, why was Britten’s War Requiem chosen to be performed as the capstone performance of the ACDA conference?
A: These conferences often present a rarely-heard masterwork from performers in the host city, and I suggested that we could present this piece. Although War Requiem is widely acclaimed as the greatest choral work of the last century, many of the professional conductors at the conference will have never heard a live performance of it. In addition, choral music celebrates the idea of collaboration, inclusion, cooperation, and many people working toward a common peaceful goal—all of the principles behind this work. 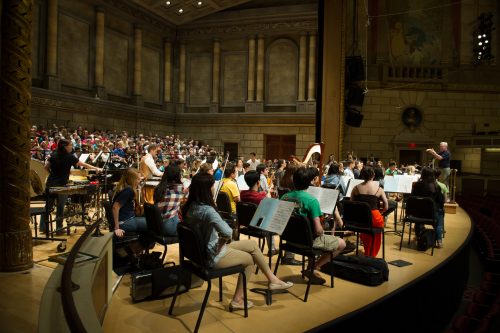 Britten’s War Requiem in rehearsal for previous performance at Kodak Hall under Dr. William Weinert, held on May 2, 2013. This concert observed the 100th birthday of composer Benjamin Britten.

Dr. Weinert will conduct all five incredible ensembles as well as the three soloists in this Friday’s performance of the War Requiem. In the spirit of the piece, the event will be free-of-charge, with donations being accepted to benefit UNICEF. For more information about the upcoming ACDA conference, please visit https://acdaeast.org/.