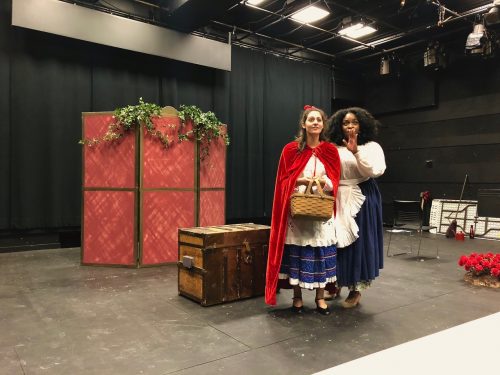 Rehearsal photographs by Jeremy Lopez. See below for the names of the Little Red cast.

Ian Silverman is the Eastman School of Music’s only opera stage directing student. During his time at Eastman, he has had the opportunity to direct part of the Spring 2019 opera scenes production, and will be directing the Eastman Opera Theatre winter 2020 mainstage double bill of Salieri’s Prima la musica e poi le parole and Mozart’s Der Schauspieldirektor. Aside from his academic directing projects, Ian has also pursued outside opportunities and even created one for himself at this year’s Fringe Festival.

The Rochester Fringe Festival is known for being packed with performances and exhibitions set up and run by local artists and musicians who aim to push boundaries spread their message. Ian’s production of John Davies’ Little Red’s Most Unusual Day is doing just that by teaching kids about opera through a story they’ve heard dozens of times. This children’s opera uses music from quintessential opera composers such as Rossini and Offenbach to tell the story of Little Red Riding Hood while simultaneously introducing children to this genre of music.

Although Ian has directed operas before, this will be his first time directing a show for the Fringe Festival. Directing a show for the Fringe Festival involves much more than just being a stage director; it was his responsibility to find the singers, a music director, and a stage manager while managing publicity and funding all on his own. In an interview, I asked him about his experiences thus far with organizing a production in all of these capacities: 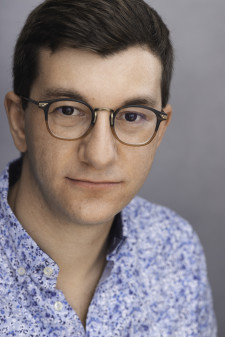 Q: First, how did you go about finding all of the people involved in the show?

A: Well, the good thing was that they ended up all being my friends, so that made it much easier. However, I used the auditions for Eastman Opera Theatre last season to help me find the right singers. Also, part of the reason I picked the people that I did was that three of them have graduated already which made it a lot simpler to coordinate schedules. That was a huge help.

Q: How did you hear of Little Red’s Most Unusual Day by John Davies?

A: This show is part of the John Davies Opera Tales series which has been done throughout the country. They did this production at Finger Lakes Opera last year, and the series has become sort of a “rite of passage” for directors. Everyone has to do one at some point! They’re all so fun because Davies takes preexisting music to tell the story. One is all Gilbert & Sullivan, this one is Offenbach and Rossini. They’re also all really zany takes on fairytales. There’s Jack and the Beanstalk, The Three Billy Goats Gruff, The Three Little Pigs, and so many more. This one is his most famous, though, so it seemed like the perfect first one for me. 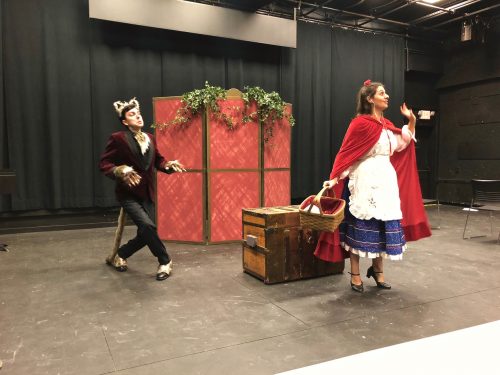 Q: Did you have any trouble securing funding?

A: Yes and no. We are lucky to have the Friends of Eastman Opera as a possible source, so I reached out to Udo Fehn, the new chair of FEO, and asked if they would be able to help in funding the project. They agreed to help us by providing a stipend, which was a huge help in everything from props and costumes to the rights for the show and printing posters. We were also really fortunate that over the summer we got an email from the University of Rochester Institute of Performing Arts saying that they would pay for our Fringe Festival registration fee, and pay for the registration fees of anyone involved with the University that is putting on a Fringe show. So that was a huge help with funding. We’re also being advertised by them in the inside cover of the Fringe guidebook and the University of Rochester website.

Q: What has been the most challenging part about managing all aspects of the production?

A: The publicity is definitely the hardest part. Getting the word out is hard, especially because there are so many things that happen at Fringe. I think there are over 500 shows! The question became, “How do we get to people, and how do we reach out to kids and families?” I really targeted where kids are, so we’re on several websites for kids from the Rochester area. Finding community engagements like these really helped to spread the word.

Q: What has been the most rewarding part about working on this show?

A: Getting to put together a show with my friends has been really great!

Q: Finally, how do you think working on this Fringe production now will help you in the future?

A: Well, children’s opera and community outreach is something that I am really passionate about. I’ve had the opportunity to work on a children’s opera in Miami with the Miami Children’s Chorus this past May, and it was something that I really wanted to continue with. I hope it will become a bigger part of what Eastman Opera Theater can offer in the future, so I thought this was a good way to start that. Also, to have that opera outreach experience going forward is something that will be valuable to offer because a lot of what young resident directors do at Young Artist Programs is run the outreach portion that each program offers. 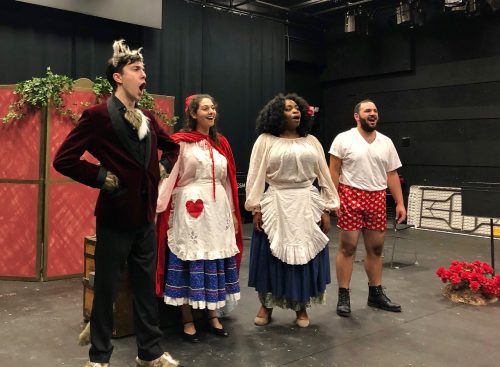 Ian Silverman’s production of Little Red’s Most Unusual Day runs September 14th through September 16th at the Lyric Theatre’s Cabaret Hall, with performances on Saturday at 3:00pm, Sunday at 11:00am, and Monday at 7:00pm. Admission is $10 for adults, and FREE for children 12 and under.

Jeremy Lopez is the Eastman Communication Office’s Arts Leadership Intern for 2019-2020 and a senior voice student in the studio of Kathryn Cowdrick.