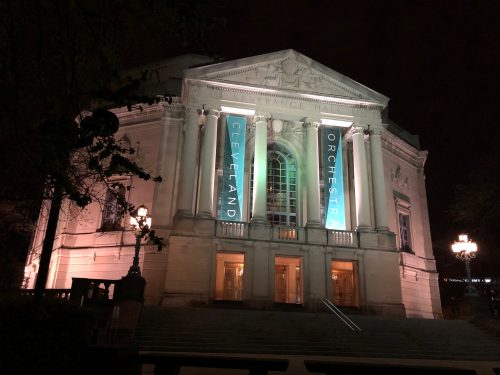 Despite the scale of this program, the ensemble only had two weeks of rehearsal leading up to this performance, which is around one week less than normal for the large ensembles at Eastman. Though the pressures were high, everyone knew what a privilege this performance would be, and we invested the work necessary to produce a product that they would be proud of. We presented our concert first on Monday, May 6 at home in Kodak Hall, and met shortly after at 7:30 the next morning to depart for Cleveland, set to perform just twelve hours later. 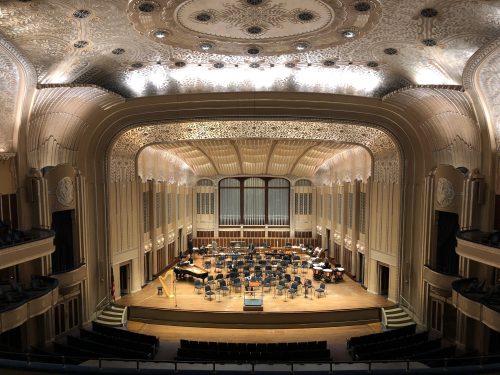 A balcony-view of the interior of Severance Hall. Photograph by Andrew Bockman.

Severance Hall is the home of the Cleveland Orchestra, and is regarded by many music-lovers as one of the world’s most beautiful concert halls. It was built in 1931 and underwent a two-year renovation project, completed in 2000, to restore the hall’s original detailing, retain and enhance its legendary acoustics, and to provide a state-of-the-art home for the Orchestra. This was apparent to the members of the Eastman Wind Ensemble immediately upon arriving on stage. Not only does Severance Hall look beautiful, it sounds just as beautiful as well. On stage, the sound is clear and it is easy to hear what everyone is doing across the ensemble, making it comfortable to balance and play with each other. The hall took that sound and amplified it into a beautiful sonority that was true to what was produced on stage, allowing the ensemble to play the music without forcing it in any way.

The Wind Ensemble doesn’t often have the opportunity to perform for audiences outside Eastman and the Rochester community, so it was a pleasure for us to play for the audience in Cleveland. The energy and attention from the crowd was palpable, and everyone in the ensemble responded with passion, giving it their all throughout the nearly two-hour-long performance. The concert went splendidly and everyone felt immense pride in their work, not for a moment taking the experience for granted. 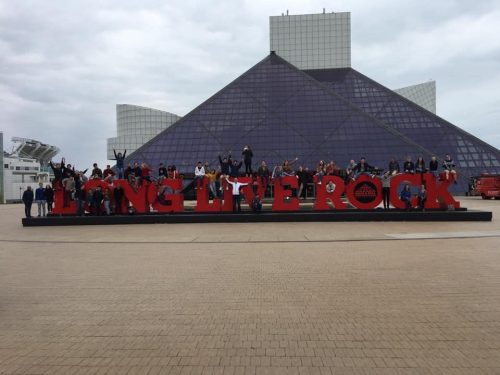 The Eastman Wind Ensemble rocks out at Cleveland’s Rock and Roll Hall of Fame. EWE director Mark Davis Scatterday is in the center, wearing a white jacket. Photograph by Leslie Scatterday.

The show was followed by food, drinks, and a night of rest in Cleveland. The next morning, everyone gathered together and rode to the Rock and Roll Hall of Fame for a relaxing afternoon spent touring the museum, before joining back on the bus for the return journey to Rochester. Dr. Scatterday shared his hope that the Eastman Wind Ensemble will have the opportunity to perform in all of the major concert halls in the nation, and after their performance in Severance Hall he has certainly left the EWE wanting more.

Andrew ’19E (MM) – shown below in a rehearsal for the EWE’s final concert of the semester – is a student blogger for Eastman Journal, and a percussionist who played with the EWE for both of these concerts. He’ll be returning to Eastman in the fall to begin doctoral studies. Photograph by Michelle Martorell. 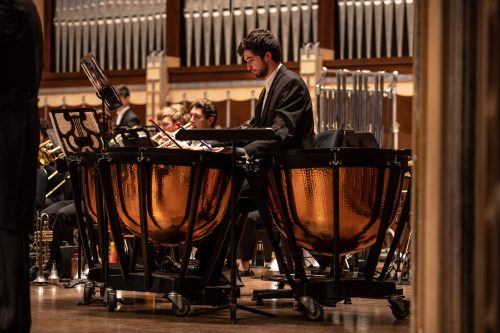