Tony Caramia, Professor of Piano, Director of Piano Pedagogy Studies, and Affiliate Faculty of Jazz Studies, is throwing a concert with a handful of musicians with Rochester ties: “1917: Celebrating the Hundredth Birthdays of Jazz Icons.” Joining him are Rachelle Fleming on vocals, Mike Kaupa on trumpet, Bob Sneider on guitar, Keiran Hanlon on bass, and Rich Thompson on drums. Caramia and crew will be playing the music of Thelonious Monk, Jo Stafford, Scott Joplin/ Johnny Guarnieri, Sylvia Syms, Buddy Rich, Dizzy Gillespie, Tadd Dameron, Lena Horne, and Ella Fitzgerald. In addition to experimenting with different personnel groupings for this concert, the show will feature a special performance brought to the audience via Youtube, and will end the show with a rousing tribute to one of the most famous live jazz recordings ever made. 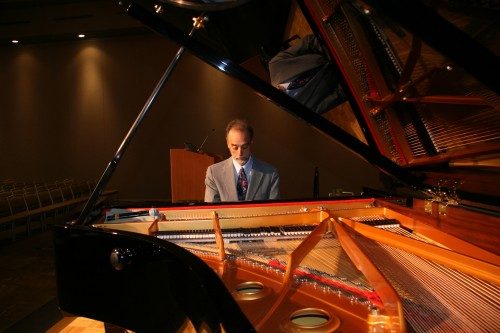 When did you start playing jazz piano?

I always that question with this comment: my father played the radio better than anyone I know, and he didn’t distinguish between listening to classical or jazz. He wasn’t a trained musician whatsoever, but he knew how to turn the radio on.

I grew up here in Rochester, and fifty-plus years ago, WXXI had just started, and even back then they did programs of both classical and jazz. Sometimes (my dad) would put on the classical station on, and I listened to it and got familiar with it, even though I didn’t realize that I would be using that as part of my career. He also played a lot of jazz.

There was a local radio personality whose name was Will Moyle, and his tag line was “Will According to Moyle.” He would interview various people, like Bill Evans, Oscar Peterson, and Marian McPartland. She and the others would come through town, and I had no idea how important they were. I remember listening to the radio, and we would have dinner on Saturday nights, and I presumed that everyone in the world was listening to it; I didn’t know!

When I got to school in Aquinas, I got involved with the theater club – and sometimes I say that I was the best pianist in the school, because I was the only pianist in the school – and so I accompanied all the musicals, got familiar with what would become standard songs that all jazz pianists play. I got to not only learn the songs, but see (their) original environment and context, as well as starting to experiment a little with jazz, until I started at SUNY Fredonia.

At the time, in the late seventies, had an unofficial but very positive bubbling jazz field. So during the day, as a piano major I learned Bach and Beethoven, and at night I learned how to swing to Bach and Beethoven. So I had the best of both worlds. I had a terrific classical piano teacher named Claudette Sorel. I had great colleagues, and we just got together for the fourteenth time, for the Fredonia Jazz Ensemble Reunion Concert.

Then when I started teaching at the University of Illinois in 1975, several people approached me to teach them jazz, and at the time, I didn’t really know what to teach. So I sat down, and asked “what do you do when this happens? …” I was just lucky that I had good teachers to absorb teaching techniques from, and I was also taught by the best, and that includes Duke Ellington, Oscar Peterson, and Louis Armstrong. So I got to fall in love with teaching as well as playing.

How did you find your way to Eastman?

In 1990, a friend called me and asked if I knew about the job opening here. She and I had worked together on a number of workshops, so she knew several things about me: that I played jazz, that I taught jazz, that I was involved with piano pedagogy at UI, and that I was from Rochester. So knew that my parents were still alive at the time, and she said: “Would you like to come and interview?” Luckily, I was fortunate enough to be offered the job, and so I’ve been here since then.

I’m curious on your perspective on the Rochester jazz scene. You’re a ROC native, but you’ve traveled and lived other places. Everyone on this show too is a native, or has been here a long time through Eastman. What about this city enables you to do both as an Eastman faculty member and performer?

Obviously, the Eastman School of Music is one of the top music schools in the world, and it was one of the first schools to offer a degree in jazz in the seventies. Since then it has gotten more and influential in producing terrific jazz musicians, people like Jeff Beal, Renée Fleming, her sister Rachelle, and then people like people like Bill Dobbins, Harold Danko, Darius Terefenko, and our new chairman Gary Versace. We have a nice wide range of – shall we say – “vintage aged people,” as well as younger folk.

We also cross disciplines. Chris Azzara in music education is very well known in that field, and Mark Kellogg, a terrific trombonist who can play any style, and is adored by his students.

That’s what I think is unique about this place; at such a high level, no one is teaching here because they couldn’t make it as a performer, they’re teaching because that’s what they want to do. As a faculty what we try to do is a way of living and teaching as a model to our students.

How did you find the cats for this gig? What does each person bring?

Needless to say I’ve heard them all play before, but this is the first chance I’ve had to perform with all of them together; I’ve performed with each of them individually.

Starting with Rich, there’s hardly anyone better than I ever heard play drums, so well, so effortlessly, so stylistically correct, he’s also just a neat guy. He offers great perspectives on putting together the music. He’s phenomenal musician, and when I started to think about doing this show way back in February or March, he was the first person I emailed, and I said “I sure hope October 29th is free on your calendar.” He said: “I’ll make it free.”

Bob Sneider… What can we say? He’s ubiquitous in the jazz scene here. I’ve played with him a couple of times, and I wanted to make sure he was available as well.

Mike Kaupa and I share Fredonia roots… He’s terrific. He’s got a great sense of style, but also an exuberance about him too. He’s offered many suggestions.

Keiran I had done some judging with this last December. He has some Rochester; eh got his DMA in bass here, and his family lives in Canandaigua. In March, we were adjudicating for a RPYO competition… I had never heard him play jazz before, until last Thursday, when I did a version of this concert at Fredonia. About two o’clock that afternoon, we met in the studio rehearsal room, and he recruited Alec Dube on drums for this, and within three minutes I knew I was in heaven. These guys are so good, that instead of me telling them what to do, we just shared ideas. Hearing Keiran play in unbelievable. We decided to exchange residencies, so I did my gig at Fredonia, and he’s coming up to play here.

And of course, Rachelle. I’ve done one or two gigs with Rachelle, and I just adore her. She’s a musician who happens to be a singer, but there aren’t that many of those. She’s got ears the size of Montana – I don’t meant that literally in terms of her appearance – but she’s fun to work with, and she also jumped at the opportunity to celebrate the four who singers who were also born in 1917.

The jazz world seems to find a good balance honoring legacies and moving forward. You’ve done a great job structuring the concert by artist, so with this format, did you have in mind to do unique progressive arrangements of these classic tunes, or keep truer to the original tune and the artist?

That’s a good question. The nice thing about jazz is that all of us – the guys and girl on stage – including the young jazz majors here, have played those tunes since forever. But, I’m still practicing for Sunday, trying to figure out yet another way I can approach (these tunes). I’m not the kind of arranger that someone like Bill Dobbins is; I don’t have “unique” arrangements. What I tried to do (for this show) however, was to make different groupings.

For example, the first tune “Ugly Beauty,” is a piano solo. Then “Blue Monk” is trumpet, piano, and bass. “Monk’s Mood” will be guitar and piano, then the last tune will be the whole group. We’re not going to have the usual (sound)… This is what I don’t like about jazz performances, which we always play the head, we have 14 choruses from every soloist on the stage, and then we trade fours, and then an hour and a half later the tune is done. Then we do the same thing for the next tune. For me, that’s an exercise in indulgence.

Instead of having different arrangements, have different colors, different suggestions… Those are my “arrangements” as it were, my decisions, but there’s plenty of group effort. Like “Barnie’s Bugle,” which was apparently composed by Buddy Rich; now, it is a blues, it didn’t win him a Pulitzer Prize in composition, but it’s a terrific opportunity (at least hope) for Rich Thompson to do his Buddy Rich impersonation on the drums.

And the funny thing is, Scott Joplin died in 1917, but the reason he’s on the program is because an amazing stride pianist named Johnny Guarnieri was born in 1917, who’s not a household name, but he should be. He’s got this version of “Maple Leaf Rag” that is to die for. It’s in 5/4. I was going to learn it, but it’s just too hard. So I thought, what the heck? He’s free; he’ll be playing it for us from a Youtube video.