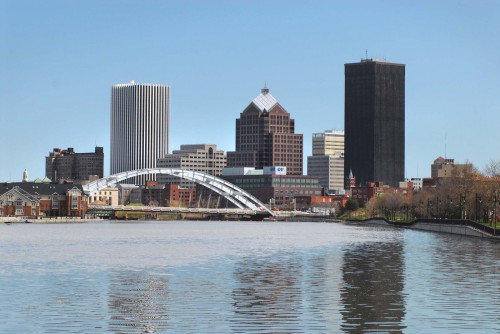 The third-largest urban area in the state of New York, Rochester is a port city on Lake Ontario, situated in Western New York. The greater metropolitan area has about 1.1 million residents. Rochester is located within a 400-mile radius of 14 northeastern states, Washington, D.C., New York City, and Toronto. It is the western gateway to the Finger Lakes region, and part of the country’s longest scenic byway, the Seaway Trail.

Rochester is known for high-tech manufacturing of Eastman Kodak, Xerox, Bausch and Lomb, and many other companies, but the city has preserved much of its historical character, and claims more sites on the National Register of Historic Places than any city of comparable size. Among them are sites relating to Susan B. Anthony and Frederick Douglass, Rochester residents who played an important role in both the women’s suffrage and abolition movements. Two of Rochester’s major public parks, Genesee Valley Park and Seneca Park, were designed by the famous 19th-century American naturalist Frederick Law Olmstead, who also designed Manhattan’s Central Park.

Rochester’s cultural richness contributes to the city’s high marks for quality of life. The Eastman School’s location in the East End of downtown Rochester puts it within easy reach of most of the venues listed below. Churches, parks, libraries, popular restaurants, and downtown shopping are also close by.